Our first encounter with Boo, an imposing grizzly bear, was rather unexpected. After bursting through the bushes, Boo stomped through a small stream and, unfazed by our presence, plopped down in the meadow and began picking at the vegetation. Many would fear seeing a grizzly up close, however, this wasn’t a normal encounter.

We were visiting the Grizzly Bear Refuge at Kicking Horse Mountain Resort in Golden, BC. Boo was born in the wild but grew up at the refuge. Orphaned at 5 months old after a poacher killed his mum, Boo and his brother Cari would be euthanised, as the government did not allow bear rehabilitation at the time.

Luckily, the cubs were given a new lease of life at the refuge, which was specifically built for them. Researchers could observe and gain insights to determine if the bears were able to gain life skills without their mother’s guidance and without human interference.

Sadly, Cari died during his first winter dormancy, but Boo has called the refuge his home for almost 20 years. Because he is habituated to humans, he can’t be released back into the wild, however insights gained through observing Boo have been instrumental in helping other orphaned cubs being released into the wild.

Since 2007, Northern Lights Wildlife Centre, in Northern BC, is the only rewilding program for orphaned grizzly bears. Since then, they have been able to release 29 cubs into the wild, with the help of research gained at the Grizzly Bear Refuge.

After our brief encounter with Boo, we were keen to learn more about him and the refuge. The refuge offers two options: The interpretive Tour or the Ranger Assist Program. We booked the latter as it allowed us to get up close and personal with Boo.

At 9am, our guide, Beth, took us up to the refuge, where, upon arrival, Boo came out of the trees to inspect us. His enclosure measures around 20 acres, the largest grizzly enclosure in the world, and is surrounded by a 9 foot electric fence. Beth pointed at several places behind the fence. “His enclosure has many features he would have in the wild, such as forested areas, waterfalls, and marshy sections.” She smiled. “He has plenty of places to hide if he wants to.”

Some visitors might be disappointed when coming to see Boo, as there is no guarantee you will see him. Unlike a zoo, the refuge tried to recreate his enclosure and mimic life in the wild as much as possible. “This is why there is no set feeding time either”, Beth explained. “Feeding occurs at random, and never at the same spot, so Boo doesn’t get used to a routine”.

Often, rangers throw food from the gondola, so it gets scattered around his enclosure. This gives Boo the opportunity to go on a scavenger hunt, which encourages him to forage for food, just like he would in the wild.

Beth continued her stories of Boo while we walked along the perimeter, swatting away the many mosquitoes that were prevalent in this area. Boo followed us the entire time until we passed two trees whose bark was rubbed off on one side. “These are Boo’s favourite scratching trees”, Beth pointed, and sure enough, Boo stood up on his hind legs against one of the trees and gave us a little dance show. It was amazing to witness such a display in person.

After his back scratch, Boo made his way to the marshy pools a little further from the fence. Rubbing trees is quite an instinctive move for grizzlies, as it’s a way to mark territory and a signal to mates. Boo has shown many instinctive moves never taught to him, which have shown that cubs could be rewilded without having their mothers present to teach them.

One of those instincts surfaced when a moose stumbled into his enclosure. “He captured and killed the moose, burying his carcass to eat from at a later date”, Beth recounted, before following up with a winter story. “Boo spends his winter dormancy in a holding area created for him, but one year he spent the winter in a den he created himself.” This den wasn’t perfect, but it was still remarkable, as he was never taught to create a den and hibernate.

Once Boo had disappeared into the forest, Beth took us to a yurt at the end of the enclosure, providing a welcome relief from the mosquitoes. Inside the yurt there were several displays on bears, both grizzlies and black bears, as well as other Canadian wildlife. Public education about grizzly bears is the primary mission of the refuge and the information displayed inside the yurt is a sobering wake-up call on how we, as humans, are threatening these majestic animals because of habitat loss, human activity and other factors. “By raising awareness, we hope to help the grizzlies and avoid human-bear conflicts”, Beth concluded, as we left the yurt.

Over the years, we have learned a great deal about black and grizzly bears. However, after visiting the refuge, we gained a better understanding and a new appreciation for these magnificent animals. Unlike what some people might think, grizzly bears are not out there to hunt and kill us, quite the opposite, they try to avoid us at all costs. As the refuge’s ambassador, Boo gives visitors a rare look at life as a grizzly while also raising awareness for this keystone species.

Should Boo be kept in an enclosure? Why can’t he be released into the wild?

Whenever wildlife is kept in an enclosure, we wonder if this is the best life for the animal. With Boo, if he had been left in the wild after the poacher killed his mum, he wouldn’t have been able to survive. He was too young to live in the wild without his mother’s protection and guidance. Because there was no rewilding program at the time, all orphaned cubs were euthanised or moved to zoos.

The Grizzly Bear Refuge was able to rescue him and give him a life while also gaining insights to help future orphaned grizzly cubs. While the refuge has attempted to mimic life in the wild as closely as possible, Boo is too habituated to humans and cannot be released into the wild. Boo would approach humans without fear, which would put both Boo and humans at risk.

Is Boo happy at the refuge?

Boo lives in one of the biggest grizzly enclosures in the world, which replicates the life he would have in the wild. Grizzlies are also solitary animals, so he is quite happy living alone in his enclosure. Boo has escaped from his enclosure twice – and there’s his rumoured offspring wandering the mountains around Golden – but both times he did return to the refuge.

How to visit Boo

There are several ways to visit Boo. The Catamount gondola takes you to the refuge midway up the mountain at Kicking Horse Mountain Resort. Here you can walk around Boo’s enclosure or observe him from the viewing platform. Several plaques with info about Boo and grizzlies are placed around the perimeter, and inside the yurt you’ll find more in-depth information about Boo, black bears, and other wildlife. If you’d like to hear more about Boo, you can join one of the two tours:

Interpretive tours
Every hour from 10am until 3pm, the refuge runs interpretive tours where knowledgeable guides talk about Boo, his life story, as well as info about his wild cousins. Since Boo roams around his large enclosure, the guides will take you to the area where he might be, but there’s no guarantee you’ll see him. There is no tour at 1pm as Boo usually takes a nap around this time.

Ranger Assist Program
The ranger assist program takes you on a behind-the-scenes tour. With only a max of four participants you get a more personal experience and the opportunity to ask questions and see how the refuge operates. There are two times for the tour: One starts at 9am, which is the one we were on, where a ranger drives you up to the refuge and shows you the morning procedures. Afterwards you can join the first interpretive tour at 10am and go back down the mountain on the Catamount chairlift. The second tour is at 3pm, where you arrive at the refuge via the Catamount chairlift and join the last interpretive tour at 3pm, before joining the rangers while they perform the closing procedures of the refuge.

How you can help

The following links will take you to organisations involved with grizzly bear awareness. Some offer volunteering opportunities or ways to donate to their cause:

We were invited by Kicking Horse Mountain Resort on a Ranger Assist Program to meet Boo. As always, all opinions are our own and you will always read our genuine thoughts and experiences.

PrevPreviousThrill-seeking at Golden Skybridge, BC
NextReview: The Savoy Hotel in Nelson, BC – a Perfect Boutique Stay in the KootenaysNext

Things To Do On Galiano Island: The Ultimate Travel Guide 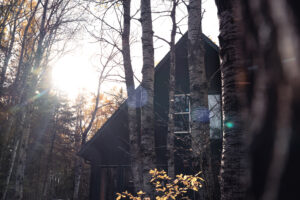 Escape to the Woods: A Cosy Cabin Stay in Riding Mountain National Park