I looked out of the tiny plane window. Through the low hanging clouds below me, I could see a few of the 300+ Fiji Islands dotted around the ocean. I was excited to start the first relaxing holiday I’d had in years. No early rising or long drives where we would need to squeeze in as much of the country as we could; no, not this time… This time was all about doing nothing.

Moving countries and our hectic work schedules had taken their toll, so Ash and I decided to recharge our batteries on the island of Fiji. There’s no better place to relax than a paradise-like country, where everything runs on ‘Fiji time.’

Upon arrival, a lively band welcomed us. The upbeat tunes followed us throughout the airport, while locals greeted the new arrivals with the customary phrase “Bula!”Bula is most commonly used as a greeting in Fiji.

We spent two days in Nadi, where most international visitors land. We loved our first few days of doing absolutely nothing, sipping from coconuts, partaking in silly hotel games (we won the egg throwing contest!), relaxing in hammocks, and indulging in typical Fijian delicacies. But, we were most looking forward to our next destination: the private Matamanoa Island Resort.

Matamanoa is a two-hour boat ride from Nadi. As we approached the small island, the staff, dressed in traditional attire, treated us to a welcome song followed by a big “BULA!”

Our appointed villa stood at the back of the island, offering its own plunge pool, outdoor relaxation bed, and of course, stunning views of the beach and ocean. “How blissfully peaceful,” I thought, unaware that this seemingly postcard-perfect island would turn into a place straight from hell as soon as the sun went down…

We spent the rest of the day relaxing by the pool, wandering around the beach and eating a delicious Fijian BBQ. As the sun was setting, giant fruit bats made their appearance. They flew high above us, landing none-too-gracefully on the palm trees. I found their apparent clumsiness quite cute – and nowhere near as frightening as the mainstream media had led me to believe…

As we retreated to our villa for a nightcap, the sound of the waves crashing against the rocks was soothing. While preparing for bed, we heard an odd howling sound outside. “The wind perhaps?” I asked Ash. “Maybe,” he said.

We didn’t give it a second thought until the sound grew louder. “Sounds like a wolf,” I mumbled, confused by the noises we were hearing. We jumped out of the bed and walked out onto the patio… Then, the sounds stopped and it was eerily quiet.

We stood there for a while, bewildered, until the sounds suddenly started again. This time, the noises came from behind us. My heart raced as I turned around. Again, the sounds stopped. Ash checked the side of the villa, while I tried to locate the noise around the back. Unable to find the source of the noise, we went back inside and tried to forget about it.

However, as soon as we turned off the lights outside, the sounds were back. This time they were even louder, and more eery. Suddenly, something dawned on me… “It’s the birds,” I realised.

Earlier that day, a member of the staff mentioned a variety of local bird, currently nesting on the island. “Don’t worry if you hear a baby crying… It’s actually the call of the Matamanoa bird,” she told us casually, so casually that we had completely forgotten about it.

In hindsight, her description was tame… For it started out as the sound of the wind and then turned into the howling of wolves. And as soon as it was pitch black outside, it turned into a full concert of crying demon babies, all around us…

We stepped back outside, and this time we walked a little further away from the villa. Once our eyes had adjusted to the darkness, we could see giant birds flying all around us. The concert had started up again in full force. It was loud, ridiculously loud. The resemblance of their sounds to those of babies crying their lungs out was disturbing.

As time passed, the cries became more forceful and they turned into devilish screams. “This is how they hope to attract a mate?” I smiled, nervously. A sudden shuffle behind us made us turn. We both stood in slight shock, as a big, black bird clumsily stumbled across our patio and disappeared to the side of our villa. “I guess he found one,” Ash said, as he walked back to the villa. I rushed after him, not wanting to stay behind in the darkness.

Back inside, we tried to drown out the sounds by turning up the air-conditioning. No such luck. Earplugs? Nope. Air-conditioning, earplugs and even trying to wrap my face in blankets and pillows? Nothing worked. We both grew desperate, as the demon babies kept crying.

After a few hours, I just gave up trying to sleep. The birds were relentless, and it didn’t look like they would shut up before sunrise. But, as the sun rose, the cries of the birds dissipated. Relief flooded through me and I welcomed the silence with open arms, as I finally drifted off to sleep.

The next morning, we moved to a villa on the other side of the island where there were no Matamanoa birds. During our remaining island nights, we slept in silence. The only flying animals around there were the clumsy fruit bats, still crashing into the palms… Bliss.

Note: We loved our time on the island. Matamanoa is a beautiful resort we highly recommend if you’re looking for a place to stay in Fiji. The Matamanoa bird breeds on Matamanoa island as well as nearby Modriki island between December and May. If you want to avoid a sleepless night, ask for a villa on the south west of the island. 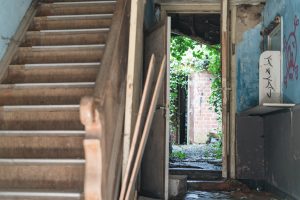