A Secret Side of Bali: Experiencing a Balinese Cockfight

I never expected to feel unnerved by an experience in Bali. I was drawn to this exotic island for its combination of traditional culture, warm hospitality, stunning beaches and natural beauty and once I had landed in Denpasar, I was captivated.

But in central Bali, near Ubud, I encountered a reality check.

I discovered a different side of Bali, hidden amongst the lush rice terraces Ubud is so famous for. Because I wanted to escape the crowds, I signed up for a cycling tour around the local villages. Together with our guide and another couple, we set off on our less-than-traditional tour.

In the first hour of our trip, we passed temples and visited a coffee farm. And as we rode further away from the main tourist hotspots, we encountered many roosters, enclosed in wicker baskets on the sides of the road. Their cackling followed us through the streets, a taster of what I was about to experience.

“Why are these roosters here?” I asked the guide. “They’re here to prepare them for the fights”. “Fights?” I enquired, and the guide pointed to a crowd further up the road. “Cockfights are illegal, but still popular among the locals,” he continued, before asking me: “Would you like to see one?”

Cockfighting is an ancient Balinese tradition, frowned upon by the government, but still popular among the Balinese people. The fights are part of the Bali Hindu religion where certain ceremonies require a blood sacrifice. However, cockfights are forbidden for non-religious purposes. Still, fights happen in every village in Bali, bringing with them the associated heavy gambling.

That question weighed heavily upon me, and I noticed the others in the group growing uneasy. I’m against animal cruelty – but I was curious, and so, it seemed, was everyone else…

The entrance was unassuming but beyond lay a bustling venue, a modest marketplace filled with food. As we walked through the crowd, I sensed heads turning to watch us, following our every step. We approached a small arena, with circles of grey concrete steps and a sandy inner ring where the fights took place. An energetic vibe pulsed out of the area, as men of all ages shouted, their arms held high, clutching money in their hands. No women or other tourists were present.

In the middle, two opponents and their roosters began preparing for their next fight; the men antagonised their stock by holding the birds’ heads against each other. Around them were placed baskets with roosters, waiting for their turn to fight, and slowly becoming agitated by the cacophony of sounds hitting them like a barrage of bullets.

There was a long wait before anything happened. The referee slowly scanned the crowd while waiting for the opponents. I took my camera out and tentatively started taking photos; I felt uncomfortable with every click.

His eyes found mine and lingered while his mouth betrayed a slight hint of surprise. Suddenly, I was acutely aware of our differences – we were the only Westerners, and the crowd consisted of only men. It felt like I was intruding on something secret, something only locals were privy to.

Surely he’ll start shouting soon and have us removed, I wondered to myself. But no shout came, and his attention shifted back to the busy crowd.

Shortly afterwards the sign was given, and the fight began. Apart from pecking at each other, the roosters have a secret weapon: The Taji, a blade strapped around one of its heels. The fight, however, was over in a heartbeat as one of the roosters cowered backwards, the blade never even needing to be used.

No blood was spilt in this fight, but the losing rooster ended up as dinner for the winning fighter. In the fighting pit, the birds were prepared on-site at the top of the arena for everyone to see… and nothing was allowed to go to waste.

The fights were far from over, but we had seen enough. We quietly made our way back to our bicycles. Our discomfort showed on our faces, but in the end, we were glad to have experienced something different, albeit controversial, on this stunning island.

The ride back was quiet, as all of us contemplated what we’d seen earlier that afternoon. The roosters on the side of the road made way to wooden, carved Balinese art and clothing stores as we approached Ubud. We were back in the tourist hotspot, leaving behind a side of Bali that most visitors will never encounter on their travels. 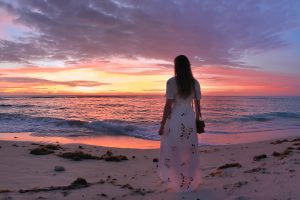