Visiting 3 Countries in 1 Day From Barcelona

City trips are perfect for relaxing and recharging your batteries if you have a full-time job like I have. Flying away for the weekend to a new city, exploring its vast history, or just enjoying some cocktails while watching the sunset, is a great way to unwind and escape your hectic life at home.

The planning, however, even for such a short trip, can be tedious. Deciding what to do each day, making sure you hit all the important sights, can be tiresome. That’s why I decided on my recent trip to Barcelona to let someone else take care of everything, and join a group tour for 1 day.

I love making the most of my time when visiting places, so when I saw I could visit 3 countries in 1 day on the Viator website, I knew I had found the perfect tour.

Keen to visit 3 countries in 1 day? Book your tour here

The tour starts in the centre of Barcelona where we had to meet our group at 6:50am. I’m not a morning person so it was a challenge to get up in time. Still half asleep, we reached the meeting point where Enrique, our guide for the day, introduced himself and happily showed us our route on the map.

Our group was a mix of people, young and old, from around the world. We were guided to our small bus by Enrique, which was very spacious inside.

Soon enough, we found ourselves en route to our first stop in Baga, Passing the beautiful Catalan landscape as well as Montserrat, a UNESCO World Heritage Site.
The drive took us around 1,5h. As we were driving through the Pyrenees, there were plenty of photo opportunities. It was a shame we didn’t stop anywhere to take some quick pictures, but we were on a tight schedule, and luckily, I was able to snap a few from the bus.

As we entered Baga, it felt, as Enrique described, like a ghost town. There are plenty of holiday homes here, so they are only occupied a few weeks per year. The first thing I noticed when stepping out of our little tour bus, was that the temperature was at least 5 degrees colder than in Barcelona, and I regretted not taking a small cardigan with me. The other thing I noticed was that apart from the occasional local passing us, there are numerous cats roaming the streets of Baga.

Enrique guided us through the small streets towards a beautiful viewpoint overlooking the valley where he gave us a short history about the town and surrounding area. At first I wasn’t too impressed with the town, until we entered the main square.

The square was surrounded by quaint stone houses and an arched gallery on one side. It was eerily quiet, with the occasional cat casually strolling around the square. A bakery was situated at one side, and a small café under the arched gallery. We all ordered a coffee or hot chocolate to properly wake us up while our guide proceeded to tell us about the history of Spain and Catalunya.

After our short stop in Baga, we jumped back on the bus for a 1,5h journey to France where breakfast would be served. The views were stunning as we were driving deeper into the mountain range. After emerging from quite a long tunnel, the scenery opened up and we were treated to a landscape of wide plains with snow capped mountains as a backdrop. After entering France, it’s still a half hour drive to Mont-Louis, a UNESCO World Heritage Site.

Mont-Louis is a quaint walled town, with only a handful of streets offering cafés, B&B’s, restaurants and small tourist shops. After my (second) breakfast, consisting of a croissant and a hot chocolate, my boyfriend and I walked around the little town, taking numerous pictures of the beautiful views of the French Pyrenees.

Our time in Mont-Louis was quite short, and soon we were en route to our next stop: Andorra. The views were pretty stunning on this 1,5h journey and I wished again we could stop for a little while to take some photos. As Andorra is a sovereign microstate and not part of the European Union, you do need a passport to enter the country. Or so I thought.

I’m not sure how it usually works, but our bus just drove through the border control area without any checks. We stopped right after border control, and Enrique collected the passports of the people who wanted an Andorra stamp. I thought this was a very thoughtful gesture, and I happily handed over my passport.

Even though it was quite cool inside the bus, the temperatures had been rising outside, and I was instantly baking when I stepped out of the bus. Enrique gave us over 1,5 hours to find a lunch place and explore the city.

Andorra was nothing like what I expected it to be. We visited Andorra La Vella, the capital city, which looks quite modern. With tax free shops everywhere, It’s a shopping paradise, so if you’re looking for a few new things to buy, this is the place. Unfortunately, I wasn’t there to shop, and I felt the city lacked a bit of character.

After our stroll around, our bus took us up the mountain slope to an old church with gorgeous views over Andorra La Vella. The view sparked my interest in Andorra gain, and I felt slightly disappointed not being able to explore a few hidden gems Andorra was hiding behind its tax free shopping façade.

Our trip back to Barcelona took around 2,5 hours, with a quick stop along the road for some snacks and refreshments. As we took a different route back, we were treated to different landscapes of Catalunya.

If you love mountain views and would like to visit the Pyrenees on your trip to Barcelona, this tour will surely satisfy your needs. Even though you are spending quite a bit of time on the bus, there is never a dull moment as behind every bend, there’s another great photo opportunity.

If you like to count countries (like I do), there’s no better tour where you can add 3 countries to your list in one day, while still being able to explore the different places you’re visiting.

Bring a small cardigan, as the first part of the tour it is a bit colder than in Barcelona.

Breakfast is included, but quite late. I would suggest taking something small to eat en route. Alternatively, you can buy something in Baga.

This trip is great if you want to see the Pyrenees!

My trip was kindly offered by Viator, however all opinions are my own and you will always read my genuine thoughts and experiences. 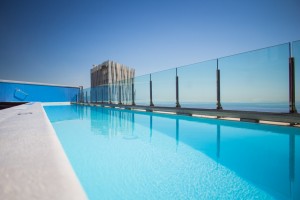