I looked out of the plane’s small window and admired the scenery below me. The landscape resembled a painting, with the river echoing broad strokes across a sandstone-coloured canvas… We were flying above the Slims River Valley, in a place where the Slims River snaked through dried-up land. The wind picked up and blew the valley dust across Kluane Lake, creating an otherworldly scene.

The wind was not kind to our tiny plane, which could only fit four people: two pilots and two passengers. The bumpy flight made me queasy, but it did not quell my enthusiasm…

To combat my motion sickness, I opened the window an inch. The fresh air allowed me to forget my uncomfortable predicament and instead, enjoy the spectacular scenery of Canada’s most inaccessible park: Kluane National Park and Reserve.

In this land of extremes, you will find a myriad of options to satisfy the adventurer in you. Every year, experienced climbers undertake expeditions to Mount Logan ‒ Canada’s tallest mountain ‒ with only around half of them successfully reaching its summit.

However, hope is not lost, for travellers can easily turn to Icefield Discovery, whose tours assist climbers by taking them up into the mountains and icefields. This provides you with an ideal starting point for expeditions.

The opportunity to see the vast wilderness of Kluane National Park and Reserve had been on our bucket list for a long time ‒ so when Ash and I arrived at Icefield Discovery’s airstrip, we were rather disappointed to hear that they had cancelled the flight.

Planning a trip to the Yukon? Read our Yukon roadtrip travel itinerary for more info

Because we had wanted to take the less adventurous route: admiring the icefields from above, Mike Butler ‒ an experienced pilot at Icefield Discovery ‒ discussed the few remaining options with us. He was confident that we could still fly up to the Kaskawulsh Glacier but warned us in advance that it would be a bumpy flight.

After a short briefing, we set off on a discovery flight around the wilderness and icefields, which are located close to Canada’s largest peaks.

The first leg of our journey saw us flying over Kluane Lake and the Slims River Valley where dust was swirling around the valley and lake. Dust storms are now a daily occurrence on Kluane Lake, but this was not always the case. The Slims River, which is fed by the Kaskawulsh Glacier, has always been the main source of water for Kluane Lake. However, in the last few years, the river has slimmed down to a trickling stream… The reason? The retreating Kaskawulsh Glacier. It has retreated to where its meltwater now flows into the Kaskawulsh River, away from the Slims River Valley.

The absence of water in the valley has now exposed Kluane Lake’s bed, which, as a result, has created a desert-like landscape filled with dust storms.

As our journey continued, I kept my eyes firmly on the horizon to combat the motion sickness. Occasionally, I averted my gaze to the valley and the mountain slopes, where I tried to look for white dots scattered along the snow free slopes.

Thachäl Dhäl, translated as Sheep Mountain, is an excellent place to spot Dall sheep. Sometimes, you can see over 100 sheep grazing on the sunny slopes!

As we flew deeper into Kluane National Park, the landscape became even more dramatic. And, while we were flying over the jagged, snow-covered peaks, the wind began to push our small plane from all sides. Even though the flying conditions weren’t perfect, I felt safe in the hands of our pilot, Mike.

We passed over the Saint Elias Mountains, traversing several peaks before we reached the highlight of our trip: Kaskawulsh Glacier and the icefields below.

Ash and I both looked out in awe at the spectacular scene below us. The glacier swept through the mountainous landscape, resembling a paved highway. To form the Kaskawulsh Glacier, two tributary glaciers meet. In the process, they have also created fascinating lateral and medial moraines (accumulated glacier rock and debris).

By now, the wind was making the flight too uncomfortable, so Mike turned back. On our last stretch, we soared above the Boreal Forest, where grizzly bears and moose often wander. My eyes scanned the terrain below, trying to glimpse either animal, but sadly, they remained elusive.

Instead, all I could see were the effects of climate change. Although it was a stunning sight to behold, the dwindling Slims River also marks major ecological changes. The changes not only dramatically affect the landscape ‒ but they also have a major impact on the animals, who call this region their home…

Thirty minutes after take off, we landed back safely at Kluane Lake. As I placed my feet firmly on the ground, I took a moment to absorb the beauty of what we had experienced: a glimpse of a place that has remained truly wild.

It is a rarity on this planet… and something I hope we can protect for the future.

Flightseeing tours: Icefield Discovery Tours organise flightseeing tours from their headquarters near Kluane Lake. Tours range from one to two hours in duration, with an icefield landing on the 1,5h tour. Pricing ranges from $265 – $350/pp for the shorter tours.

How to get to Kluane National Park: It takes 1h40 drive from Whitehorse to Haines Junction, the main town, which is located on the edge of Kluane. From Haines Junction, it takes another 45 minutes by car to reach Icefield Discovery.

Tourism Yukon invited us to experience the Yukon on a week long road trip. As always, all opinions are our own and you will always read our genuine thoughts and experiences.

Save this article for later. Pin it! 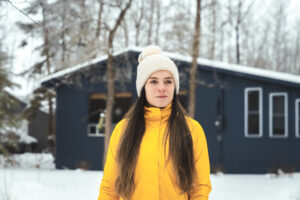 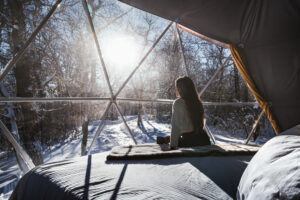 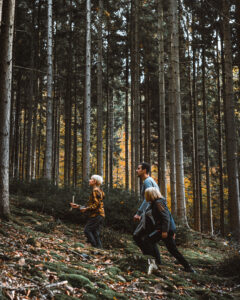