If you love dramatic coastlines, make sure to add Northern Ireland to your bucket list. With over 200 km of beautiful and diverse coastline, numerous castles bulging with history and dramatic cliff landscapes, you’ll be filling your SD cards in no time.

We spent 3 days in Northern Ireland, and even though this is not nearly enough time to explore everything the region has to offer, we made sure we used our time efficiently. We explored Belfast on our first day, while the second day we decided to explore the coast.

Related: Passing through the Dark Hedges in Northern Ireland

An early start brought us to the International hostel by 9am. After picking up a few more passengers at the Europa hotel, we started our tour around 9:30am. The bus was spacious and seated around 43 passengers. There was no on board toilet facilities, but we made enough stops along the way.

Our guide of the day, as well as the driver, Raymond, was both funny and informative. He talked throughout the whole drive about the places we were driving through, our stops of the day and added funny and interesting anecdotes in between. I’m impressed he was never at a loss for words. 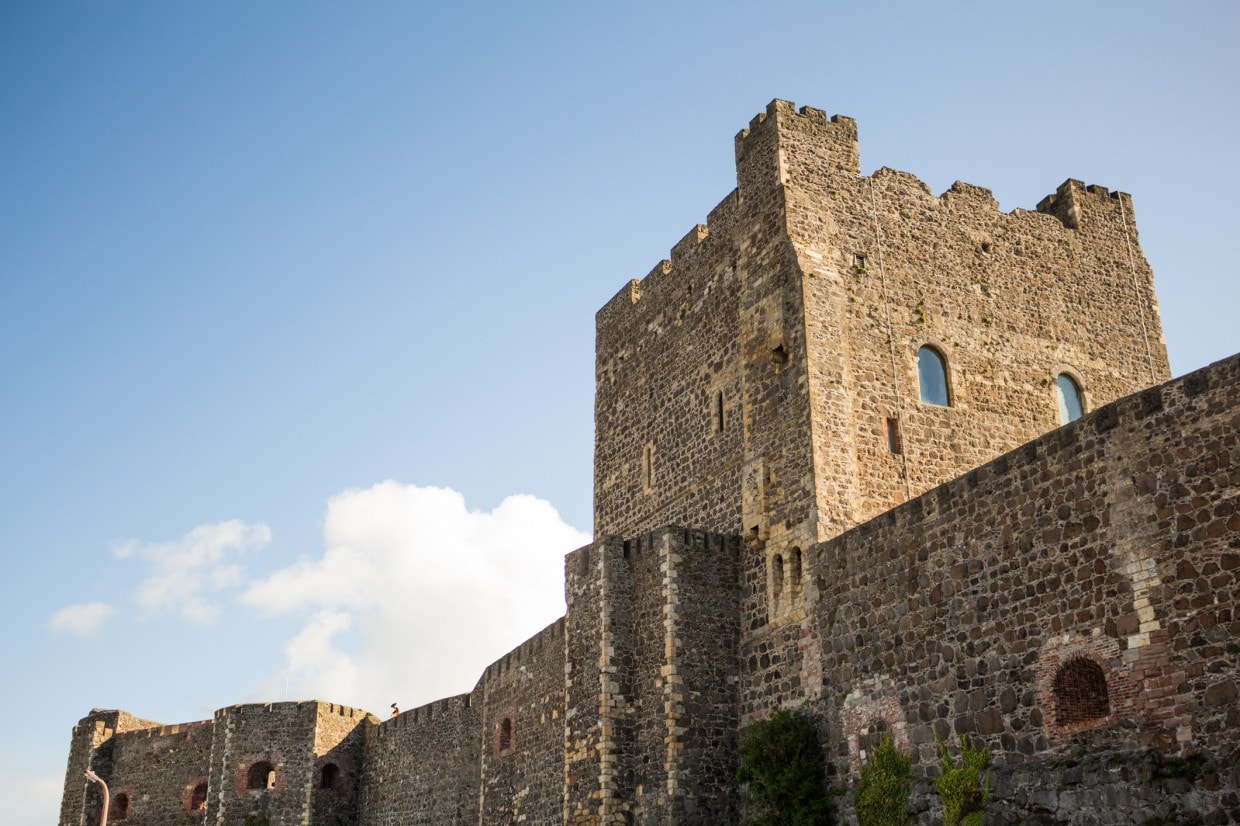 Our first stop, after driving for 20 minutes, was Carrickfergus castle. Unfortunately, this was only a photo stop. We were given 10 minutes to check out the outside of the castle, and the small harbour next to it. It’s not the best time of the day to take photos at the castle.

The morning sun is right behind the castle, making the sky overexposed, and the castle too dark. Unless you are a professional photographer, or like editing your photos at home, (I highly doubt anyone on the bus was either of those), your photos won’t look very impressive.

In my opinion, this stop was a waste of time, as you don’t actually visit the castle, and the sun makes it hard to take quick photos on the go.

Drive along the coast

The next stop was the Carrick-a-rede rope bridge, which is a 2 hour drive from Carrickfergus castle. We drove along the beautiful coast, with plenty of information given by the driver. It definitely wasn’t a boring drive, although some people did fall asleep, and if you’re seated on the left side of the bus, you won’t have the best views.

Luckily, we were seated on the right side of the bus so I was able to take some snaps along the route.

Make sure you are seated on the right side of the bus to enjoy the best views of the coastline. 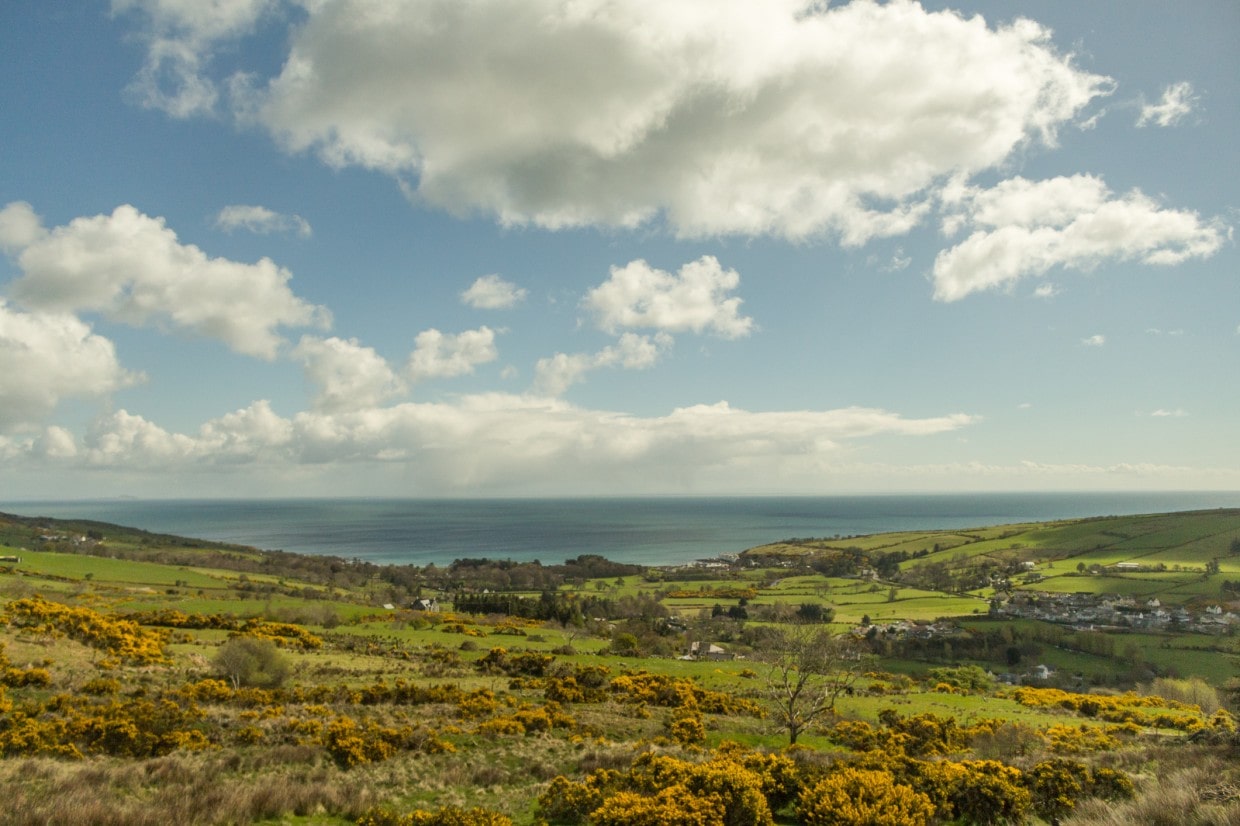 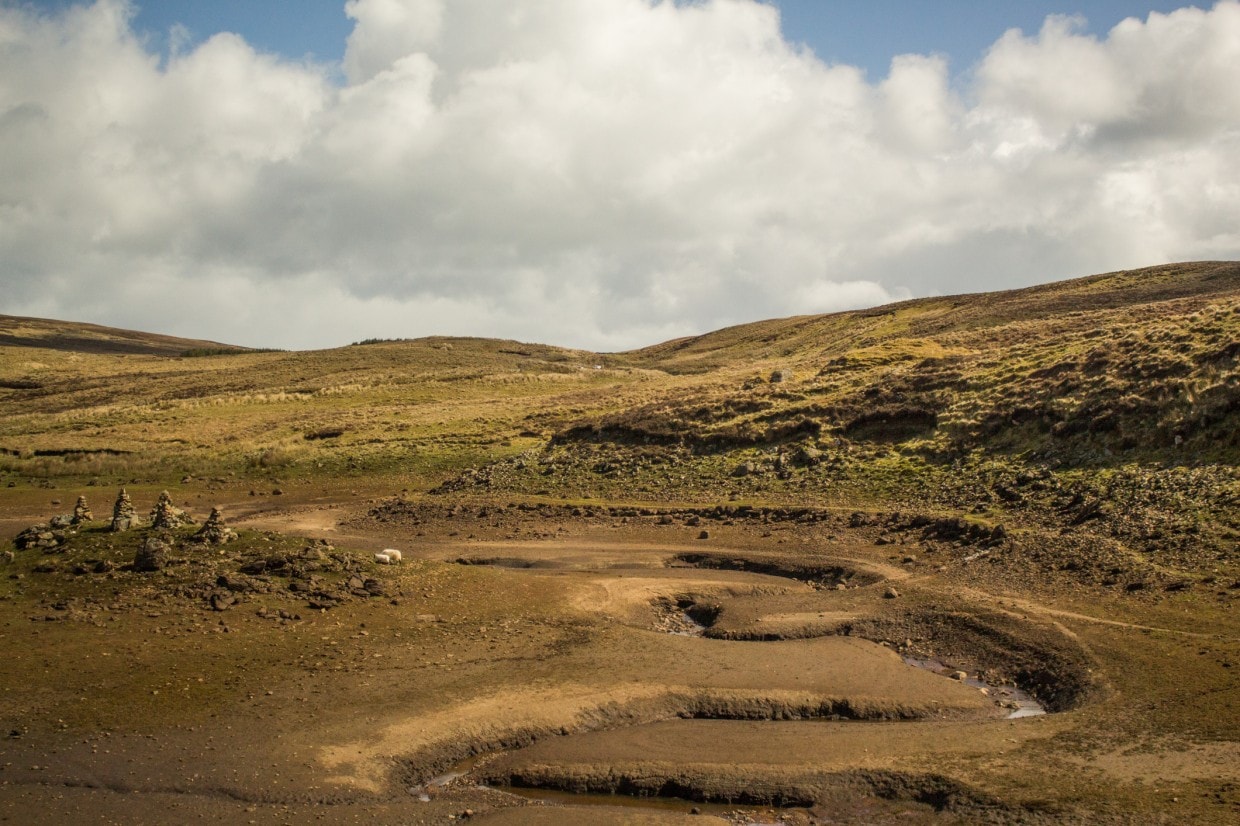 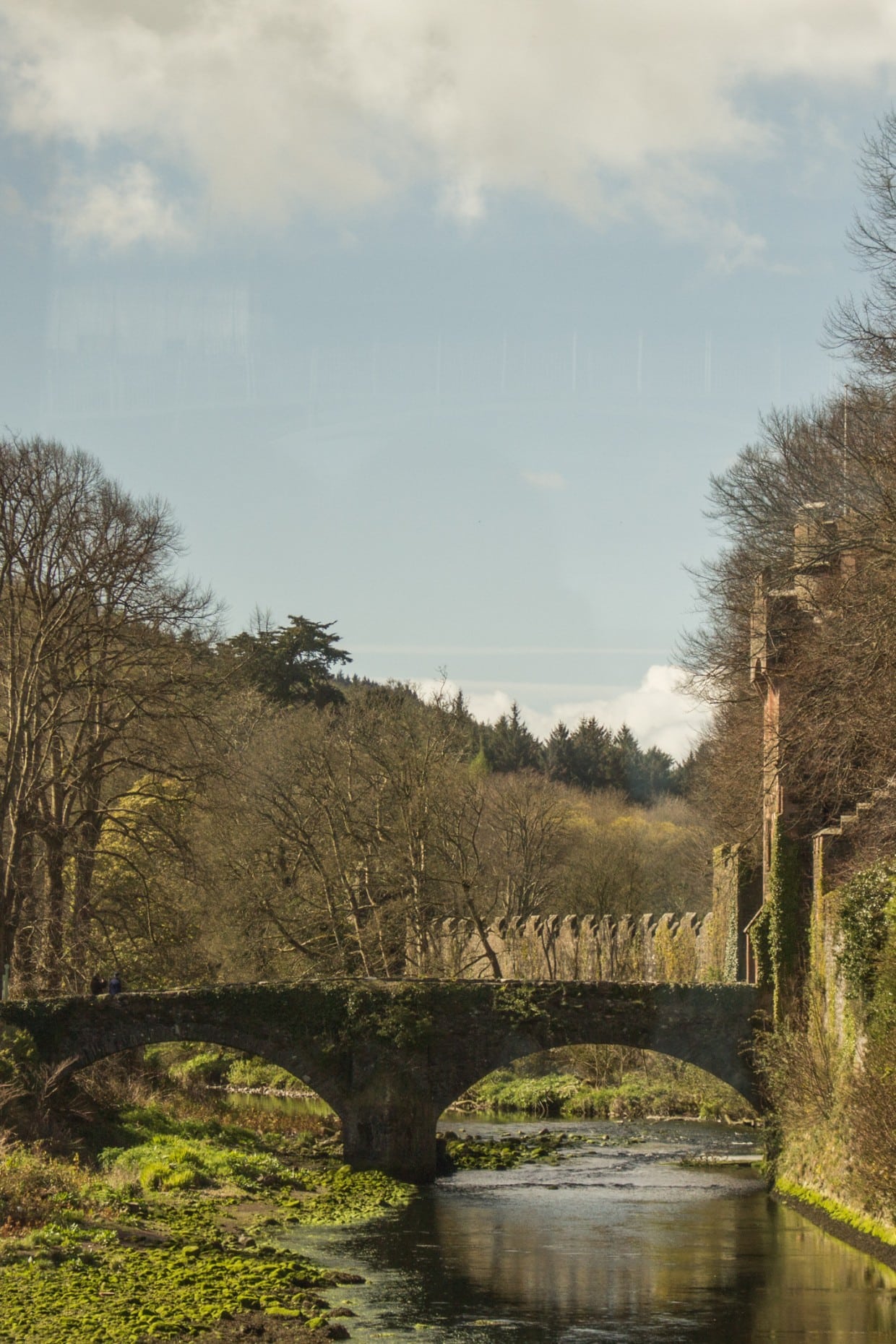 The weather up until this point had been quite nice. Sunny with a few scattered clouds. While driving along the coast, we could see some dark clouds looming over the ocean, an ominous view of what was waiting for us later that day.

We purchased tickets to cross the Carrick-a-rede bridge and the Giant’s Causeway visitor’s centre on the bus, so when we arrived at the Carrick-a-rede rope bridge, we didn’t have to queue to buy tickets, but go straight to the bridge.

Buy tickets in advance and make your way straight to the bridge to avoid standing in the queue.

From the car park, this is a 1km walk along the steep cliffs. We quickened our pace, to make sure to get there before the whole group would arrive, as we were told the bridge can get quite busy. 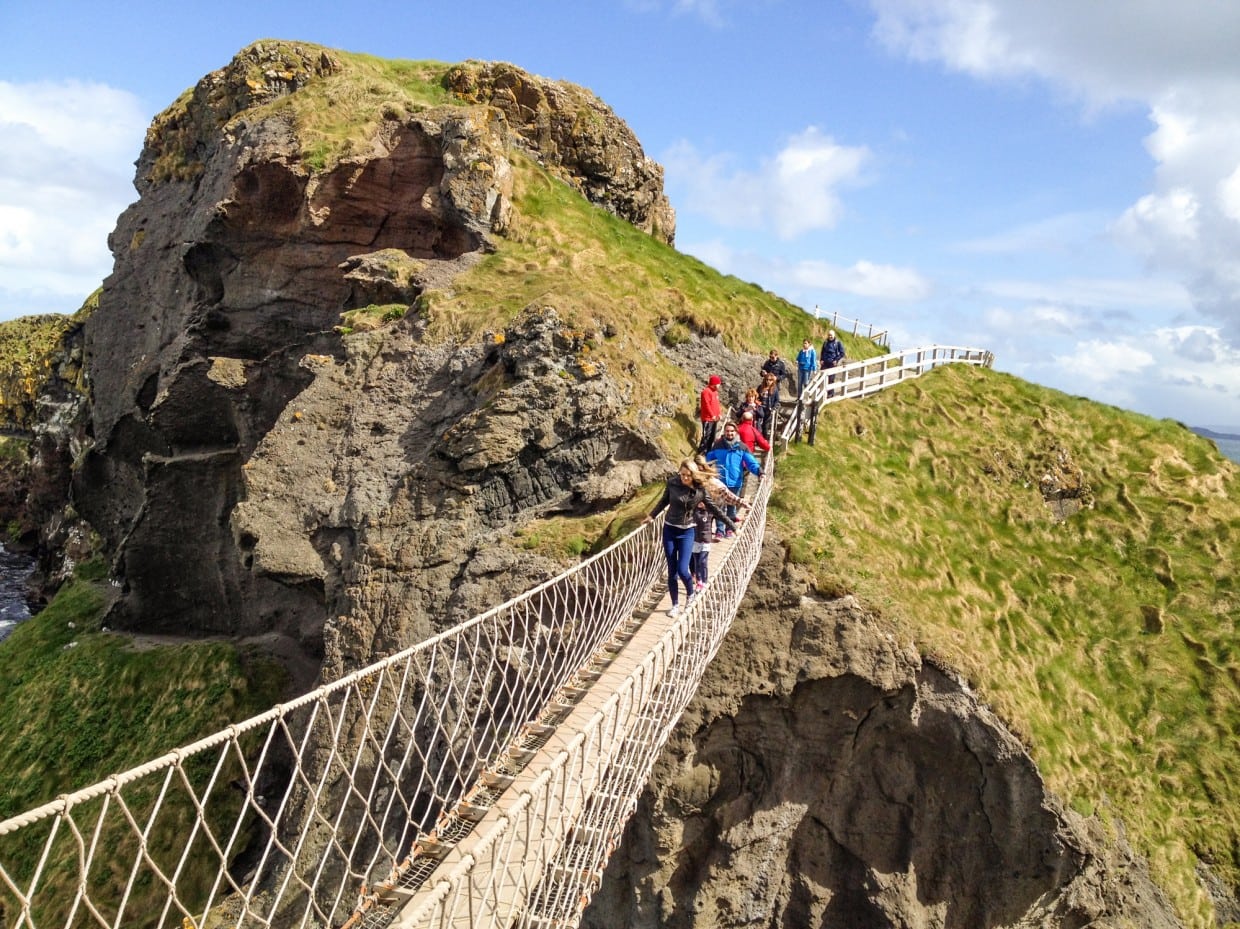 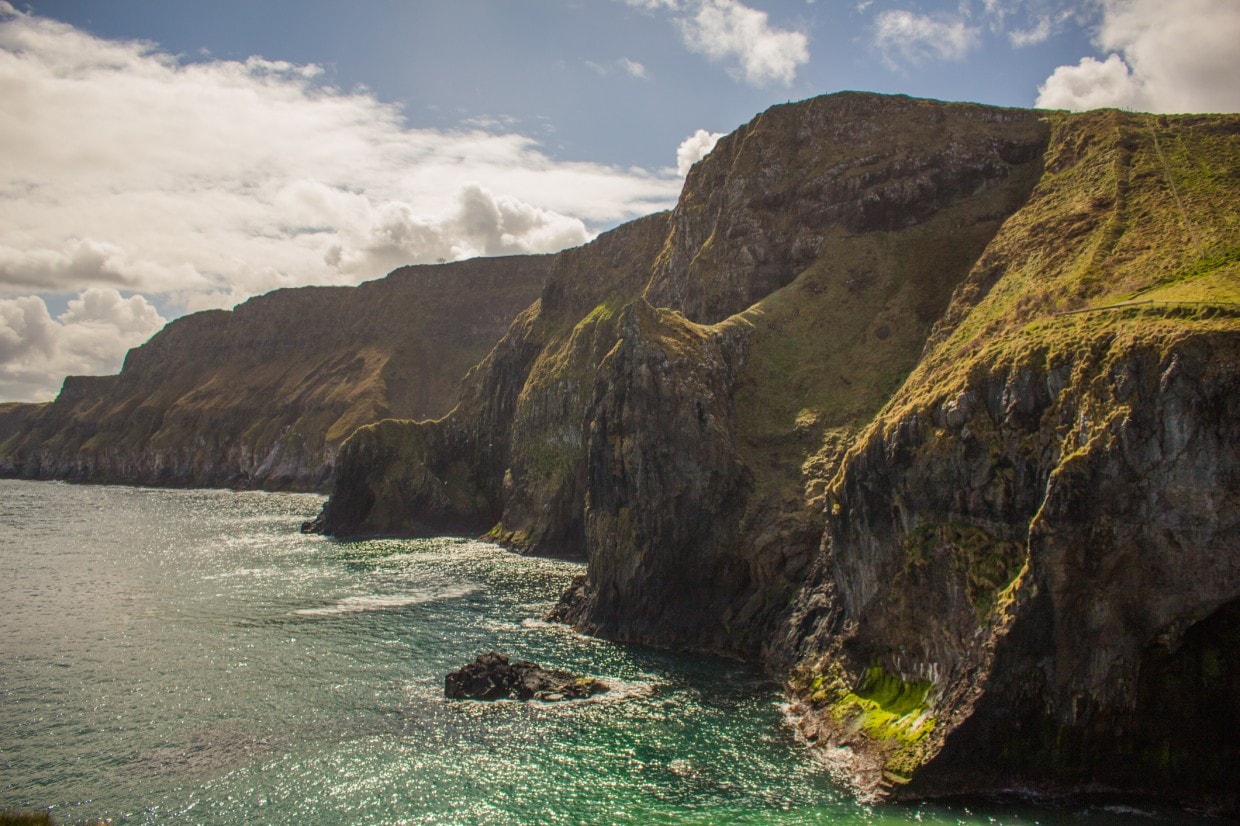 The Carrick-a-rede suspension bridge is built almost 30m above sea level by fishermen 350 years ago. The bridge connects the mainland with ‘Rocky Island’.

When we arrived at the bridge, we were able to go straight onto it, as there was no queue. There was quite a bit of wind, which made it difficult to walk the 20 metres without holding onto the rope railing.

I planned to take a few photos while on the bridge, but the wind made it too risky to let go of the ropes. I found myself on the other side of the bridge in no time, slightly sad that I didn’t even look around me or down at the crashing waves against the rocks.

The wind was so ferocious, I rushed to the other side of the bridge without catching a glimpse of the crashing waves against the rocks below me.

After only 5 minutes on the other side (it’s only a tiny rocky island), I made my way back over the bridge. This time, I managed to look around, and even take a quick photo of the ocean below me (even though there was more wind this time). 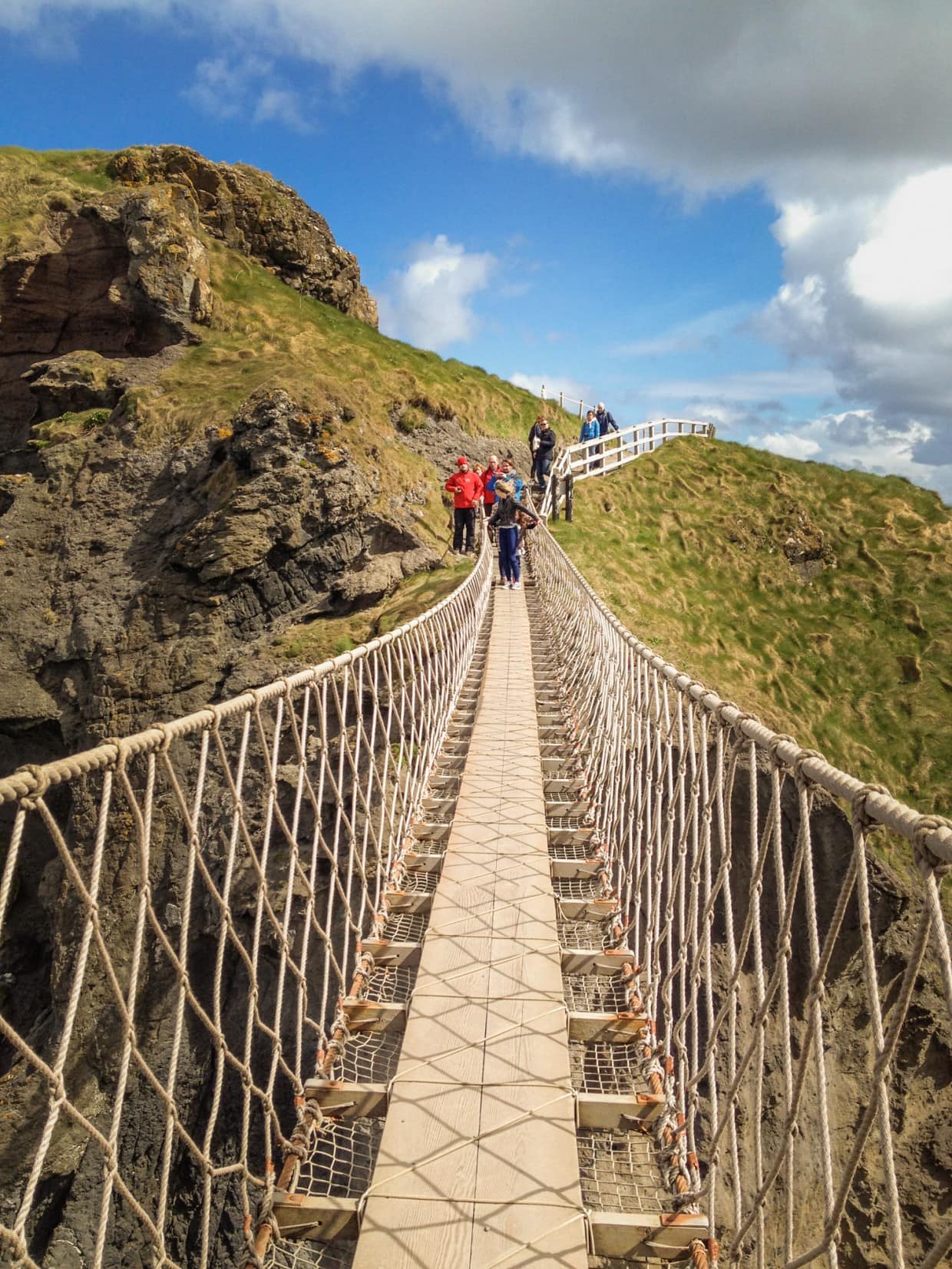 After crossing the bridge to the mainland, we quickly made our way back to the car park as an impending hailstorm was looming over the ocean.

As soon as we reached the little cafe, the hailstones started to fall and the whole area turned into the characteristic grey landscape Northern Ireland is known for. The hailstorm was over in 10 minutes, and the sun made its appearance once again.

The whole area turned into the characteristic mysterious grey landscape Northern Ireland is known for.

Lunch at the Bushmills distillery

After our visit to the Carrick-a-rede bridge, it was time for lunch. We drove to the Bushmills distillery, where we could eat some lunch at the cafeteria, or take a tour around the distillery.

The food was a little bit disappointing, however we were offered a sample of their 12 year old triple distilled reserve single malt whiskey. I love whiskey, so this was a welcoming treat. 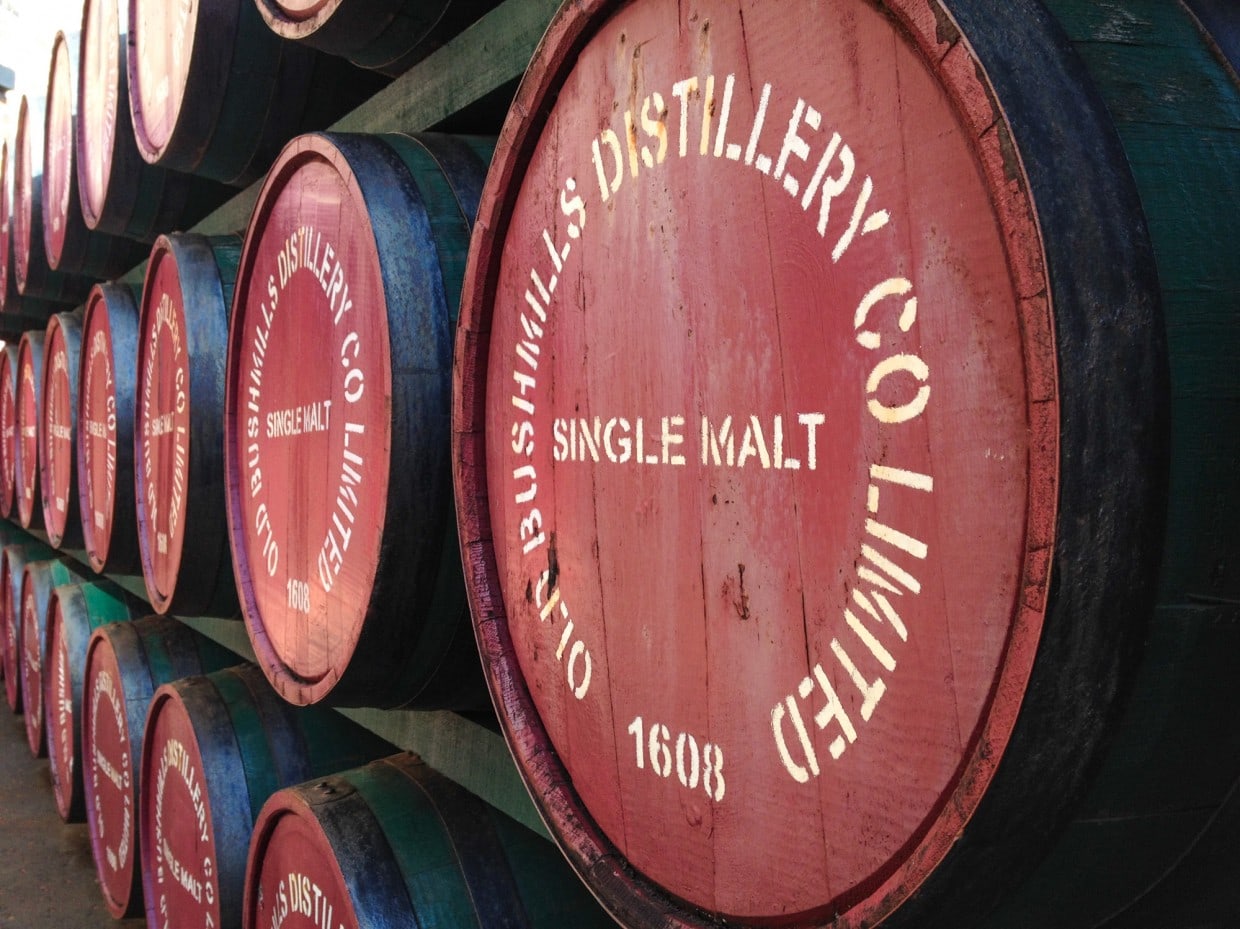 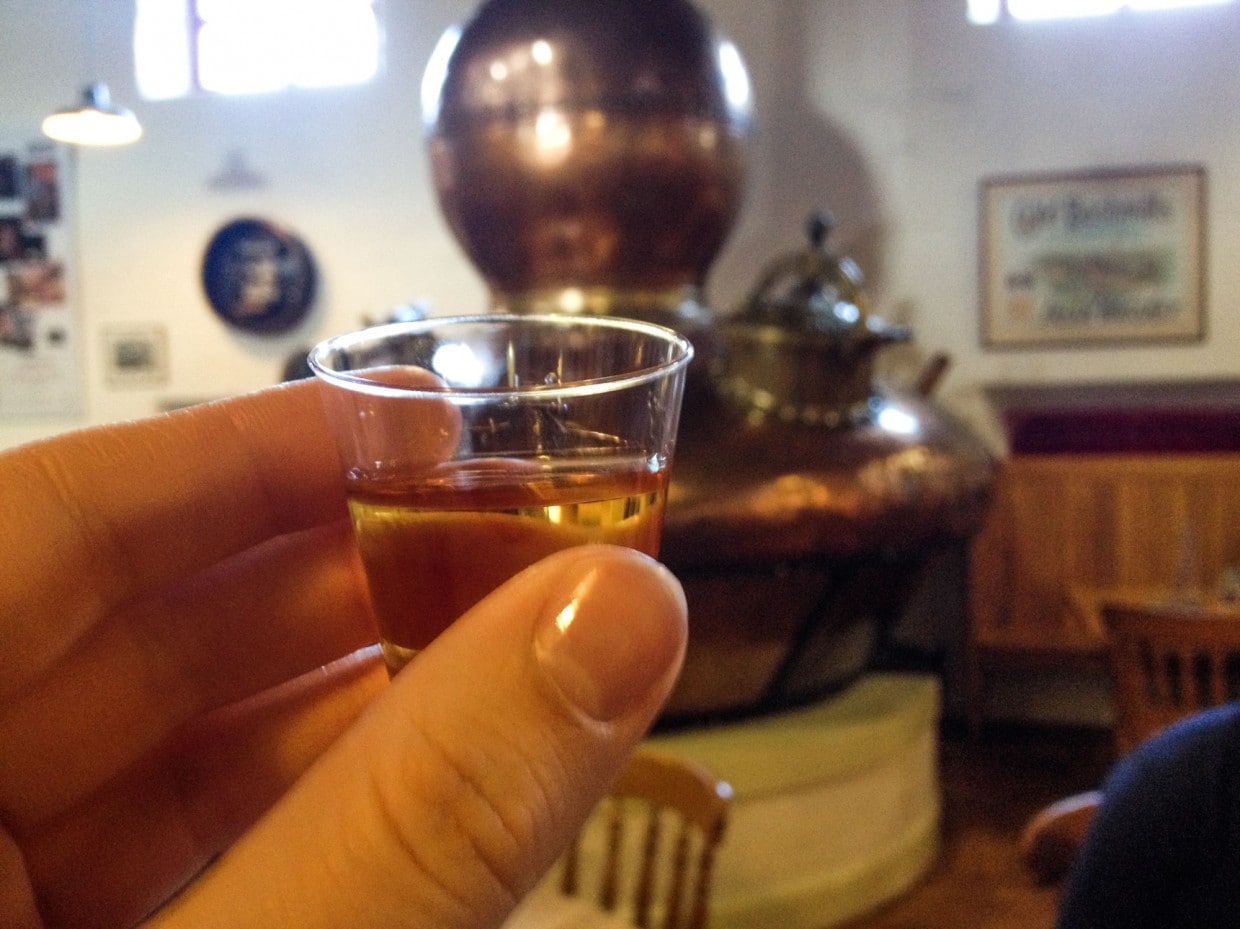 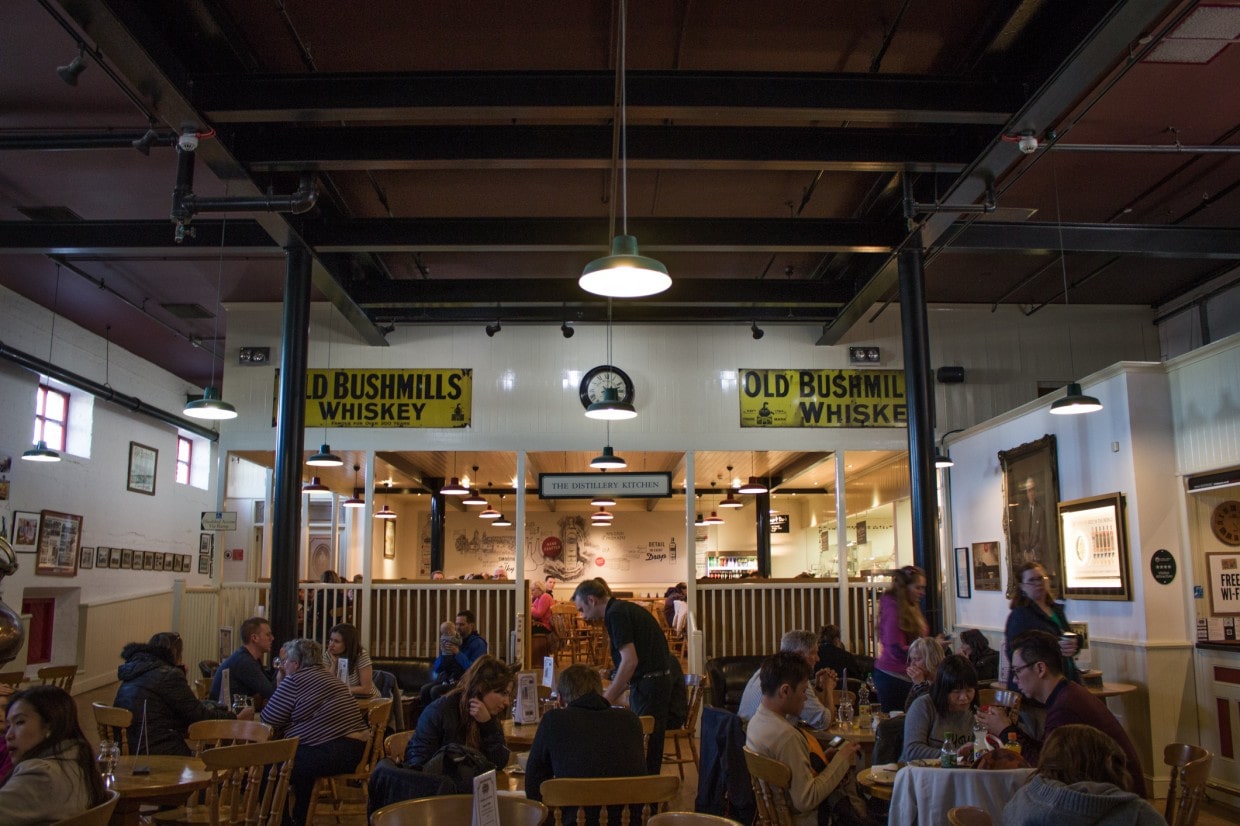 Dunluce castle was next, but to my surprise, it was also just a photo stop from quite far away. I had been looking forward to seeing the castle. Perched on top of steep cliffs, Dunluce castle is a beautiful ruin on the North Antrim coast. The castle was abandoned in 1639 after part of the building fell into the ocean during a stormy night.

Perched on top of steep cliffs, Dunluce castle is a beautiful ruin on the North Antrim coast.

I took a few quick snapshots, hoping one of my photos captured the beauty of the ruins, before jumping back on the bus and driving towards our final stop of the day: the Giant’s Causeway. 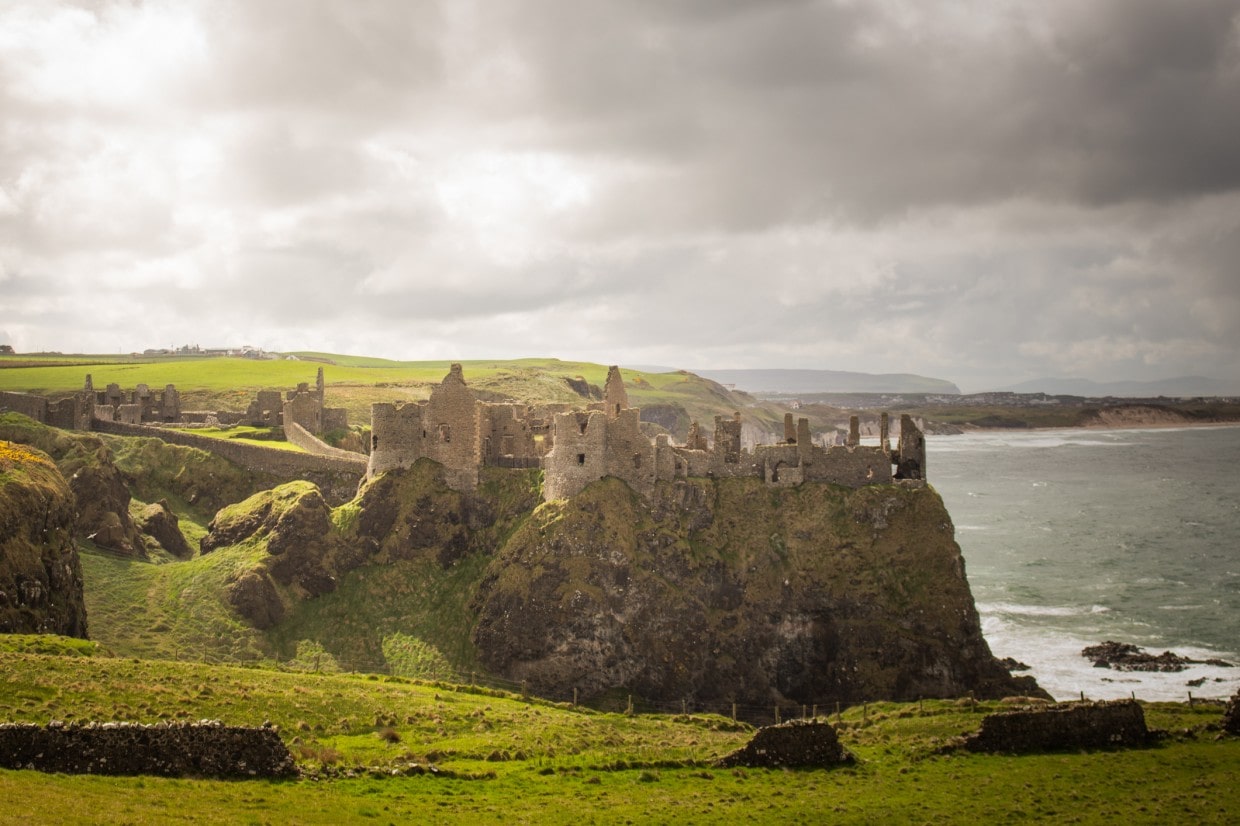 The Giant’s Causeway, a UNESCO heritage site, is famous for its basalt columns, created by a volcanic eruption. Most of the columns are hexagonal, however some have 4 or 5 sides, and can measure up to 12 metres.

There’s plenty to see and experience at the Giant’s Causeway and you can easily spend a full day enjoying Northern Ireland’s most beautiful coastline. 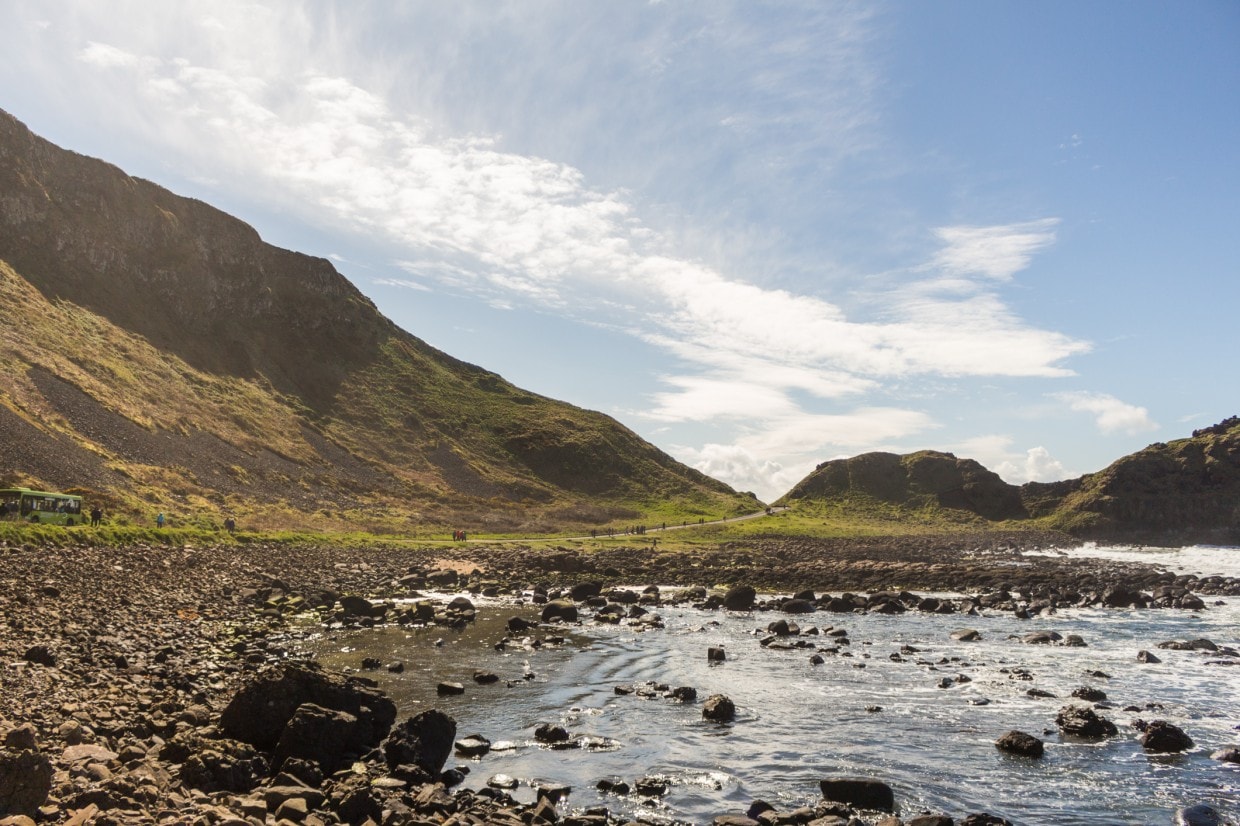 You can either make your way down to the area the Giant’s Causeway is most famous for: the basalt columns, or explore the hiking trails on top of the cliffs.

There is a bus operating every 15 minutes from the visitor centre which will take you down in less than five minutes. However, I do recommend walking down while enjoying the impressive views, which you will most likely miss if you take the bus. 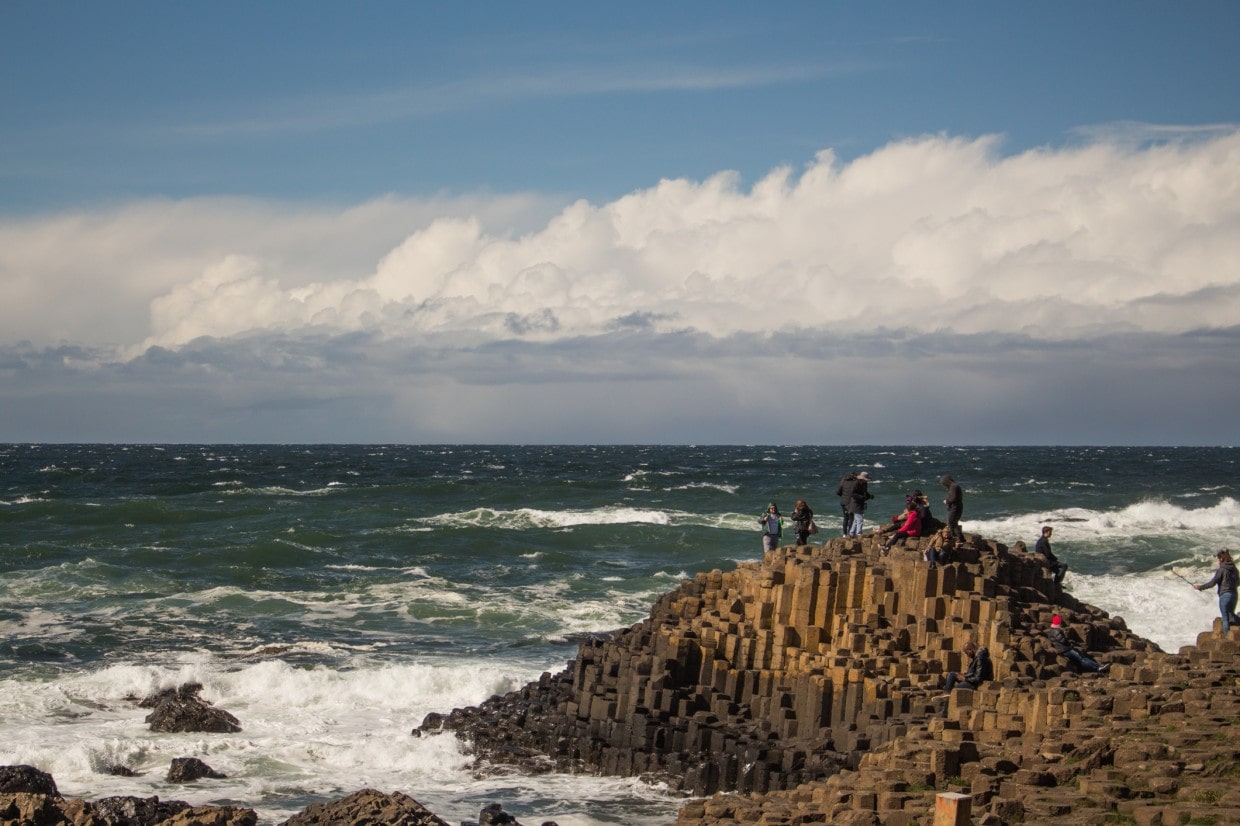 After exploring the columns, taking 100’s of photos and enjoying the views, we decided to walk one of the trails towards the Chimney Stacks. The trail used to follow the coastline for quite some time, but due to increasingly dangerous conditions and erosion of the cliffs, they closed down most of the trail.

We turned back and joined a trail leading up onto the cliffs where we were treated to spectacular ocean views.

A little controversial is the ticket you have to buy if you want to visit the visitor’s centre, where you can find a cafe, souvenir shop, and toilets. The ticket price also includes the audio guide, which we never used.

You don’t need to buy a ticket to see the Giant’s Causeway, and if you want to eat something without having to pay to gain entrance to the cafe in the visitor’s centre, there is a hotel/restaurant right next to the centre.

Don’t buy tickets for the visitor centre, unless you want the audio guide.

Since we bought tickets for the visitor centre, we decided to have a look inside and see if it’s actually worth the price. I wish I could say yes, but it really isn’t worth paying money for.

You’ll find a souvenir shop, with items ranging from books to toys and jewellery, a café offering a selection of sandwiches, desserts and hot and cold drinks, and an interactive exhibition about the Giant’s Causeway.

It offers what any visitor centre should offer, but while visitor centres are usually free, you’ll have to pay £7.50 (online price) to visit this one. 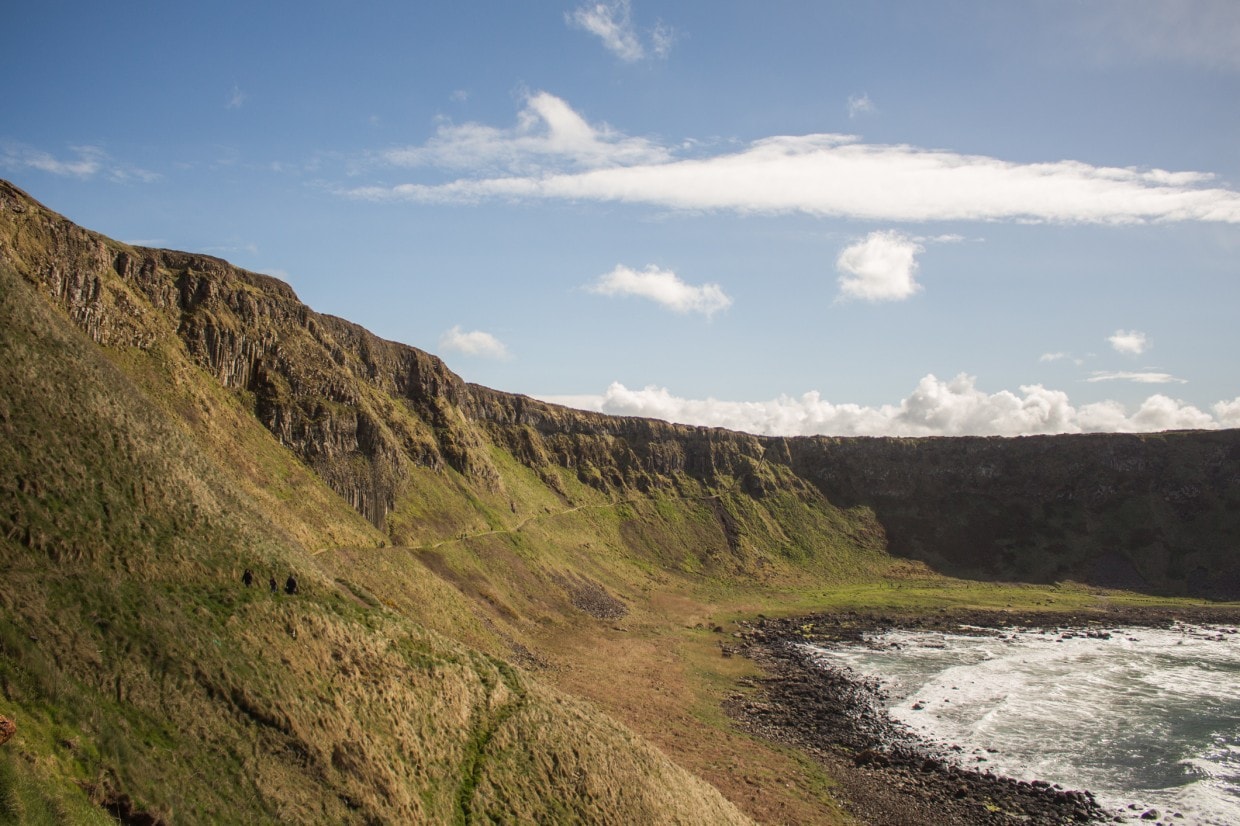 Join a tour or hire a car?

If you are visiting Northern Ireland, and you don’t have much time to explore, I do recommend joining a tour to visit the Carrick-a-rede rope bridge and the Giant’s Causeway.

If you have a little bit more time, and don’t mind driving yourself, I would recommend hiring a car and exploring the region at your own pace. This way you can decide your own itinerary, spent some time visiting the castles, hiking around the Giant’s Causeway and pick your own lunch place.

Whichever option you choose, you will love the beauty of the Antrim coast and wish you could spend a few days extra exploring the area.

WHAT I LIKED ABOUT THE TOUR

We were able to see key places in Northern Ireland in a short time. The guide was very informative and funny at times. Because you’re being driven around, everyone can enjoy the views and take photos, instead of paying attention to the road or getting lost.

WHAT I DIDN’T LIKE ABOUT THE TOUR
Some of the places we visited were a waste of time (Carrickfergus castle, Dunluce castle), because we couldn’t actually visit the place. Lunch at the Bushmills Distillery wasn’t great. We didn’t have to have lunch there, but I couldn’t see any other places nearby where you could have lunch.

TIPS
Sit on the right side of the bus as it will give you the best views of the coastline.
Buy tickets in advance for the Carrick-a-rede rope bridge to avoid queues.
Don’t buy tickets for the visitor’s centre at the Giant’s Causeway unless you want the audio guide. 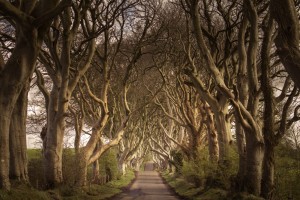 My first impressions of Belfast